The Star Gate to Heaven - Near Death Experiences 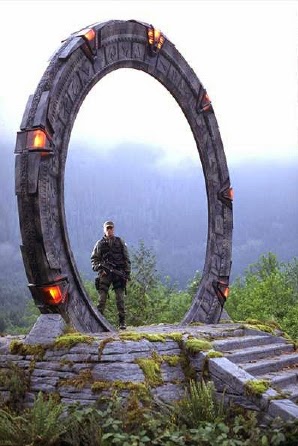 In the 1990s, I had a good friend who had a massive heart attack.  His name was Chad and he was visiting his daughter who was a nurse at the local hospital when the heart attack occurred.  His daughter immediately recognized that her father was having a heart attack and went into swift action.  Chad died and then was brought back to life by the doctors and nurses who worked at reviving him.  While he was dead he had a Near Death Experience that he relayed to me one day while we were horseback riding in the Uinta Mountains.  His story sounded like so many others that had I heard or read about: the tunnel of light that he went through to meet deceased family members, the immense feeling of love from his deceased relatives, and being totally bathed in God's love while he was there.  He told me that he was told to go back to his body, but that he did not want to.  All he wanted to do was stay in heaven.

What I found fascinating was that Chad was a devout Mormon.  He believed in Jesus as his savior, but his theology was vastly different from mine as a Baptist.  I had heard other stories from my brother, a Baptist minister, who had been at the deathbeds of dozens of people from small children to the very old.  Some of these people were church members who believed in God and some were not.  Most of the stories he had heard from Godly people were nearly the same as Chad's story.  However when my brother was with people that hated God and wanted nothing to do with him, the stories were quite different.  They often saw demons coming to get them and went into death with screams.  If they survived the near death experience, they usually could not remember the experience or they assumed that they had been hallucinating and had a nightmare.

I did further investigations into near death experiences by reading three books that told near death experience stories.  The books were 1) Heaven is for Real by Todd Burpo; 2) Visions of Glory as told by John Pontius; and 3) Proof of Heaven by Eben Alexander, M.D.  I would highly recommended all three books to see the common threads of the experiences from that of a little boy who died, to a Mormon, to an agnostic neurosurgeon.  The only real differences in the three stories were the theological perspective of the stories being told.

In Heaven is for Real, the little boy saw heaven as reflected by the theology of his evangelical-pastor father.  In Visions of Glory the stories and visions reflect the Mormon theology.  The story teller sees other righteous people in heaven who had not been Mormon, but assumes that they must have converted to Mormonism at some point in order to be in heaven.  Both the little boy and the Mormon see Jesus in their near death experience.  In Proof of Heaven, the neurosurgeon, Eben Alexander, experiences heaven without memories due to his damaged cerebral cortex.  In contrast to the little boy and the Mormon he does not see Jesus.  He sees only God who is energy emanating pure love from a concentrated source at the center of heaven.  An energy that is everywhere and in everything similar to descriptions in Judaism.

As I pondered the differences and similarities, a passage in the Mormon book "Visions of Glory" came to my mind that may explain the differences.  Here is the passage from page 89 of the book:

All of the glorified universes I perceived were one of three glories - celestial, terrestrial, or telestial.  There were other types, which were not types of glory.  These were wonderful places without glory where beings who had not qualified for a reward of glory during their lifetimes were ultimately sent.  These were of every type, of every description, and were created in response to their desires (Italics added).

So, maybe the differences in the near death experiences were merely projected by the individual and what they expect to see in heaven.  Each person that goes to heaven puts his theological glasses on and as a result sees what they expect to see.  Those that don't believe in the God of heaven do not go to heaven.  They separate themselves from God by their own mental constructs and create their own hells devoid of the God that they don't accept or believe in.  For to be with God you must first believe in God.  In the end our theological differences may not matter as long as we believe in the God that created us and return to him through repentance to walk our path through life with Him.

Posted by Daniel Duffield at 1:37 PM