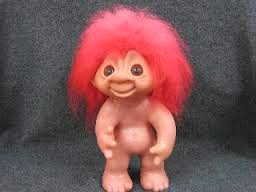 I wrote this story when I was in high school back in my home state of Michigan.  I was taking a writing class from a young teacher we called Miss Pohl.  She was a strict teacher that graded very hard and it was one of the few classes that I had work extra hard to get good grades.  Of all the writing that I did in her class, there is one story that stands out, a story that surprised even my teacher.

When all the students were seated in their seats and the class was about to begin, Miss Pohl set a small troll doll on her desk.  Her instructions were simple.  She told us to write a short story about the doll.  I sat there for a few moments and then suddenly had an idea.  From that moment on I frantically wrote with paper and pencil to capture my story.  I finished just as the bell rang to end the class period.

The next day when we assembled in Miss Pohl’s class again I could see a big smile on the teachers face as she held a paper in her hand.  She told the class that she had to read this wonderful story of “The Bus Troll” and then proceeded to read it to the class.  She never revealed who wrote the story as was her policy, but she called me up after class to talk to me.  She told me that I had an imagination and could write.  “Maybe, you should consider becoming an author someday.”  She told me.  Those words haunted me through the years.  I knew I had to write books someday and so I did.

Click on the link below titled "The Bus Troll" to read this short story for free.


Posted by Daniel Duffield at 2:46 PM No comments: