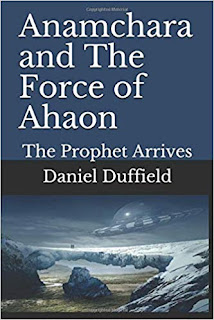 I just published a brand new science fiction book on Amazon!  My editor said that it was my best story yet!  Here is a brief synopsis of the book:


After ten years in the Air Force which included a tour in Iraq, Eli returns to civilian life in search of a computer programming position. His first interview and job offer are with Galaxy Mining Company based in Houston, Texas. He he was hired for his linguistic and military skills. On his first day at work he is stunned when he descends in an elevator on his way to the company’s underground facility and is transported off world to Mozen where he is tasked with communicating with the native inhabitants to learn how to operate their advanced technology. He soon discovers that Galaxy mining company is working with the United States military to acquire and use the alien technology. When all out war erupts, he is reluctantly thrust back into a military role in the battle for the planet and its resources. Sergeant Desiree Carter, Private Skidder, and two aliens named Remee and Farcee join Eli in his struggle to rid the planet of a tyrant King Badok to free the Mozen inhabitants. Will Eli and his new friends defeat King Badok to end the war? Will the alien technology be good for humans or should it stay with the Mozen? Who should rule Mozen, the newly arrived humans or the Mozen?
Posted by Daniel Duffield at 2:22 PM 1 comment: