I traveled to the West Bank of Israel in the fall of 2009 during Succot and stayed with two Orthodox Jews, Rabbi Avraham Feld and OvadYah Avrahami.  It was great getting to know them and the challenges they face settling the land promised to the Children of Israel.  Rabbi Feld and OvadYah recently published a book on Amazon called "Jewish Secrets Hidden in the New Testament: The Growing Global Torah Revolution".  I had the chance to review an early draft of their publication and it is well worth your time to read.  It is a must read for anyone seeking deep scriptural truths.  Here is the summary description of their book found on Amazon at http://www.amazon.com/Jewish-Secrets-hidden-New-Testament/dp/1484113551/ref=sr_1_1?s=books&ie=UTF8&qid=1388784195&sr=1-1&keywords=jewish+secrets+hidden+in+the+new+testament 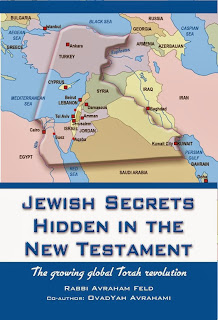 The well hidden Jewish Secrets in the New Testament are the driving force behind one of the most sensational News events of our Time – an event which is dynamically driving a fast growing Global Torah Revolution amongst non-Jewish Bible believers. After lying dormant for nearly 2000 years in the pages of the New Testament, Avraham Feld, an orthodox Rabbi, now reveals astonishing proof from the pages of the New Testament itself that, contrary to commonly accepted Christian interpretation, these writings are largely founded on traditional Jewish Biblical principles. Acceptance of these original Jewish realities by growing masses of New Testament readers is currently sweeping the world. This book presents Indisputable proof of how this current phenomenon which is evolving from these Jewish religious foundations, astoundingly confirms the unfolding of ancient Bible Prophecies. According to Bible Prophets of old and Jewish Sages throughout the ages, these Prophecies were destined to be revealed in the ‘End Time’. Jewish, Christian and even non-religious commentators of the day all agree that we have now reached this prophesied Era. This timely publication recounts the Prophetic Directives and the obstacles in the way of the ultimate fulfillment of the Divine Intention for the establishment of a re-united 12-Tribed Kingdom of Greater Israel. This review will guide you to understand the unfolding of the Climax of the Ages – the establishment of the Kingdom of God, dreadedly to evolve through a nuclear War which is now threatening Israel. The Cover of this book reveals the paradoxical Biblical prediction of a Promised Land far exceeding the current borders of Israel. Enlightened by the revealing information from the pages of this unique overview, you will better understand daily news events which are in waiting for mankind. Enlightened by the realization of the miraculous fulfillment of the Divine Plan for humanity right before our eyes, you will be empowered to ensure your becoming part of this new Universal Dominion, whether you are Christian, Jewish or secular.
Posted by Daniel Duffield at 1:31 PM No comments: