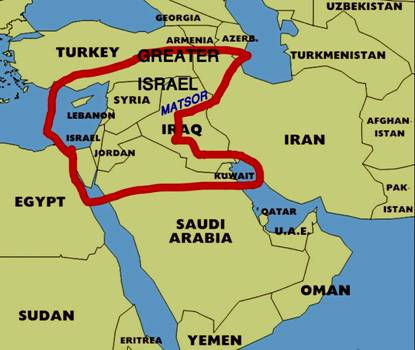 Whose land is it?  The whole world belongs to the One that created it.  God, as the creator and owner of the title, can give His land to anyone He wants to.  Specifically, the land in question is called the “Promised Land” as it was promised to the descendants of Abraham, Isaac, and Jacob.

In the end of days God’s plan as prophesied in the bible is to establish all the tribes of Israel back into the land that He promised Abraham (See Jeremiah Chapter 31).  The original promise to Abraham was for land that went from the Nile in Egypt all the way to the Euphrates River in modern day Iraq. It is what I would call God’s “One State Solution” in contrast to the world’s desire for a “Two State Solution”.  God brought the tribe of Judah (the Jews) back into the land to prepare the way for the returning exiles (the lost 10 tribes along with the rest of Judah).  According to scripture, the messiah’s role is to gather the lost 10 tribes and bring them back to the land promised to Abraham. The end result will be the Restored and United Kingdom of God that includes all the tribes of Israel (See Ezekiel Chapter 37). This is taught in both Judaism and Christianity.

A look at historical events in conjunction with the modern day phenomenon of Hebraic restoration seems to indicate that Jesus (Yashua) was the Messiah son of Joseph that God used to reach out to the lost tribes and bring them back to Himself and His Torah.  A segment of Christians have been awakened to a love for Torah and the Jewish people.  Many even have an intense desire to return to Israel and be accepted by Judah.  However, they are many obstacles in the way of God’s two great houses (Israel and Judah) reconciling.  Returning members of the lost 10 tribes (House of Israel) are lame to walking the path of Torah while the House of Judah (i.e. the Jews) is blinded to the role of the Christian messiah in bringing the lost sheep of Israel back to God and His Torah.  The only thing that will bridge these differences is the love of God and the love of brothers one for another.  All the brothers need to love God and love one another enough to put their theological differences aside.  Love is the key that will establish Greater Israel (God’s Kingdom) and implement the final solution for peace!  If God’s people don’t make progress towards reconciliation, then the evil in the world will continue to grow and eventually force His people to come together for survival.

The evil forces in the world inherently know God’s plan for Israel and are feverishly striving to thwart it.  That is why the world’s plan for peace in the Middle-east is to divide the land a piece at a time in a futile attempt to prevent God’s plan for restoring the physical kingdom of Isreal.  The world’s plan is based upon hatred and separation with Israel’s enemies vowing to destroy the Jewish state.  Two peoples cannot coexist when there is hate.  Only love for your fellow man allows peace and harmony to exist with each group respecting the other.

However, God’s plan is based upon love.  Those in the Middle East willing to love their Jewish neighbors regardless of religious differences will remain.  Those that hate their Jewish neighbors will have to leave or have their hearts changed from hate to love for them to stay.  If they continue to hate, they will have to either leave of their own accord or their hatred will result in their own self-destruction as is going on in Syria and Iraq today.  In the end the entire Promised Land will only be filled with those that love God and love His people, the Jews.  True children of God are identified by His love, not by hatred of any one group or person.

As for the rest of the world that is filled with hate for the Jews, they would be wise to listen to God’s words by the biblical prophet Joel in Joel Chapter 3:1-2:

“For behold, in those days and at that time, when I restore the fortunes of Judah and Jerusalem, I will gather all the nations and bring them down to the valley of Jehoshaphat.  Then I will enter into judgment with them there on behalf of My people and My inheritance, Israel, whom they have scattered among the nations; and they have divided up My land.”  (NASB)

Posted by Daniel Duffield at 8:46 PM